NOTE: Earlier this Spring, this article appeared in the Central Penn Business Journal. This week a few people have asked about the Pennsylvania State Construction Notices Directory (the online Lien site) so I updated the article:

A little over a decade ago, I found myself working with numerous construction trade associations to improve legislation regarding the lien process in Pennsylvania.  As a team, we were successful in prohibiting owners from enforcing ‘no-lien’ agreements.  However, this amendment to the Mechanic’s Lien Law that went into effect in 2007 was not perfect; as a result, surprise liens were popping up from second tier subcontractors and suppliers.

Since there was a major issue in the lien process, I found myself working with the same team of associations again to improve the lien process yet again. This time, when January 1st rolled around, we welcomed a new year and the Pennsylvania construction industry welcomed a new, voluntary procedure concerning the way the industry operates under the Mechanic’s Lien Law. I am referring to the creation of the Pennsylvania State Construction Notices Directory (Directory). The Directory is located at https://apps.pa.gov/scnd.

“It might be too early to have an opinion on this new state-run website, but it is easy to use and the intention of it is good. I think it’s a great idea for a supplier to have our name in front of the owner and general contractor since a lot of the times a subcontractor hires us and others might not know we are even on the project,” said Bonnie Patterson, Credit Manager for York Building Products. 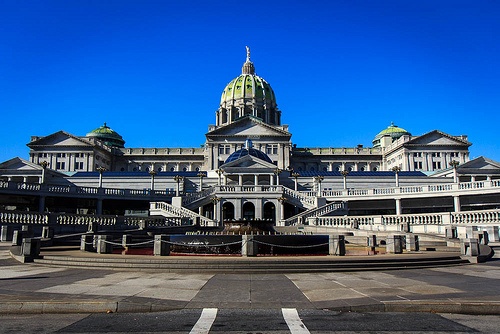 The Directory works like this: an owner, or an agent of the owner, files a Notice of Commencement for $72 (this is the only fee associated with this website) on the online database for their construction project. This filing creates a project in the Directory and then within forty-five days of first performing work or supplying materials, a subcontractor and supplier must file a Notice of Furnishing (NOF). If this NOF is not filed within the allotted time, the entity associated with the project forfeits its Mechanic’s Lien rights.

Then forty-five days after completion of work, the owner may file a Notice of Completion in the Directory. After the owner makes this filing, any subcontractor or supplier who has not received full payment may file a Notice of Nonpayment. These two notices are not mandatory. These new lien provisions are intended to create a more structured and transparent procedure through an Internet database that is easily searchable.

Theoretically, this online repository can allow owners and general contractors to check and see all the firms that are working on a project and to make sure each of these firms are being paid. By using this website, an owner potentially can eliminate the risk of a surprise lien. Now that’s theoretically, it may be too earlier to determine if it’s working as designed, but despite being less than a year old the Directory is being used.

There are currently 100 projects in the Directory from across the Commonwealth. As one may expect, the most use of the Directory is happening in the southeastern and southwestern counties since both Philadelphia and Pittsburgh are economic drivers in Pennsylvania. But the Commonwealth is represented with projects in areas like Lackawanna County in the northeast to Cumberland and Dauphin Counties in the center part of the state to Butler County in the west. And while it is being used, it is even being used by the lower tiers on a construction project, which is great news! A major issue for the first three to four months of use was the lack of knowledge of the Directory to the subcontractors and suppliers associated with a project.

“The owner required us to file the Notice of Commencement [on his behalf]. I found it very user friendly and I had no issues since I had all of the information readily available to me,” said Alec Hanley, Project Engineer, Rycon Construction based in Pittsburgh, PA. “It appears that the biggest learning curve will be with subcontractors. We have started to include language in our general scope of work that describes the procedures for filing a Notice of Furnishing and their liens associated with following this process as well as including the Notice of Commencement as an Exhibit to our contract. We’ve also continued to provide courtesy reminders that it is their sole advantage to file a Notice of Furnishing and I’ve had low rate of return.”

However, it appears as though not every general contractor is being proactive to raise the awareness of the Directory. “I found out about this [Directory] from industry trade groups. Had I not gone to a few seminars our company would have had no idea this even exists,” said Bonnie Patterson of York Building Products. “As a material supplier, the information does not always make it to us. Plus, we might be contracted to supply material to a project before the project is even listed in the Directory. I have a system now where I log onto the Directory and compare the new projects that have been added against the projects we are on.”

With this new online process, the Keystone Contractors Association is not only providing educational seminars on it, we are also encouraging all construction companies to be proactive and diligent in protecting their lien rights.

I am the proud father of three amazing daughters and I'm married to an awesome lady. When I'm not hanging with the family, I'm the executive director for the Keystone Contractors Association. View all posts by buildingpa

Building Pennsylvania is maintained by the Keystone Contractors Association.